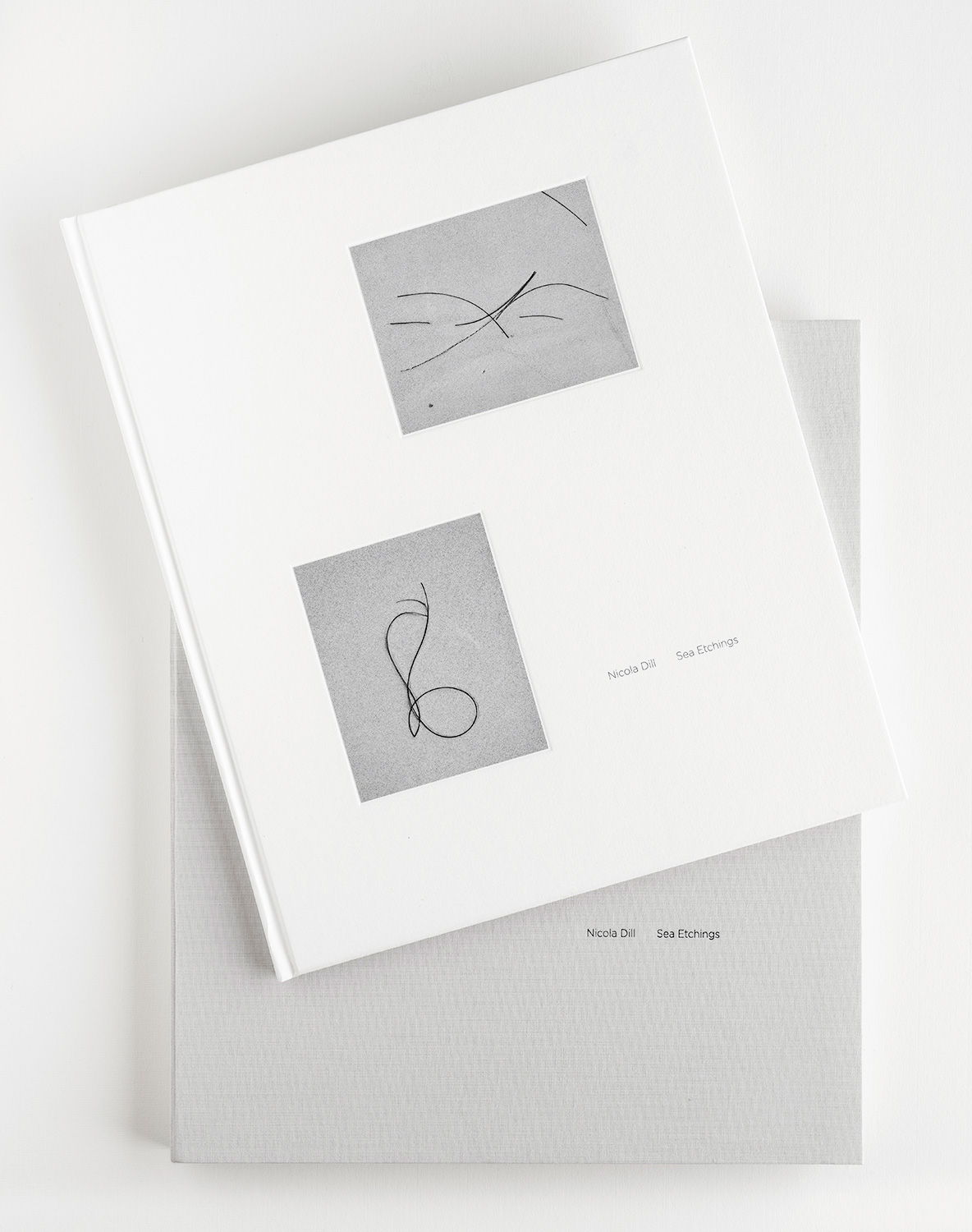 “In Sea Etchings, Nicola Dill captures the delicate compositions of surf grass on sandy shores, between waves. The images were taken through a meditative system of relinquishing artistic control to the sea watching and waiting for the moments to occur organically, completely untransformed by the agency of the human hand. Dill is able to distill her sense of evocative language and quiet musical nuances in these ephemeral moments quite remarkably - the images are reminiscent of gesture drawings and imply the strokes of a pen or a brush, almost calligraphic in how they arch and sweep so elegantly through each frame, and the way the photographs are arranged harmoniously across the pages is like a musical score. When a book is able to physically embody the very essence of its contents, then that is a book well made. If the images were words they would be whispers, or a chorus of sighs.”- Joanna Caswell, Hotshoe Magazine 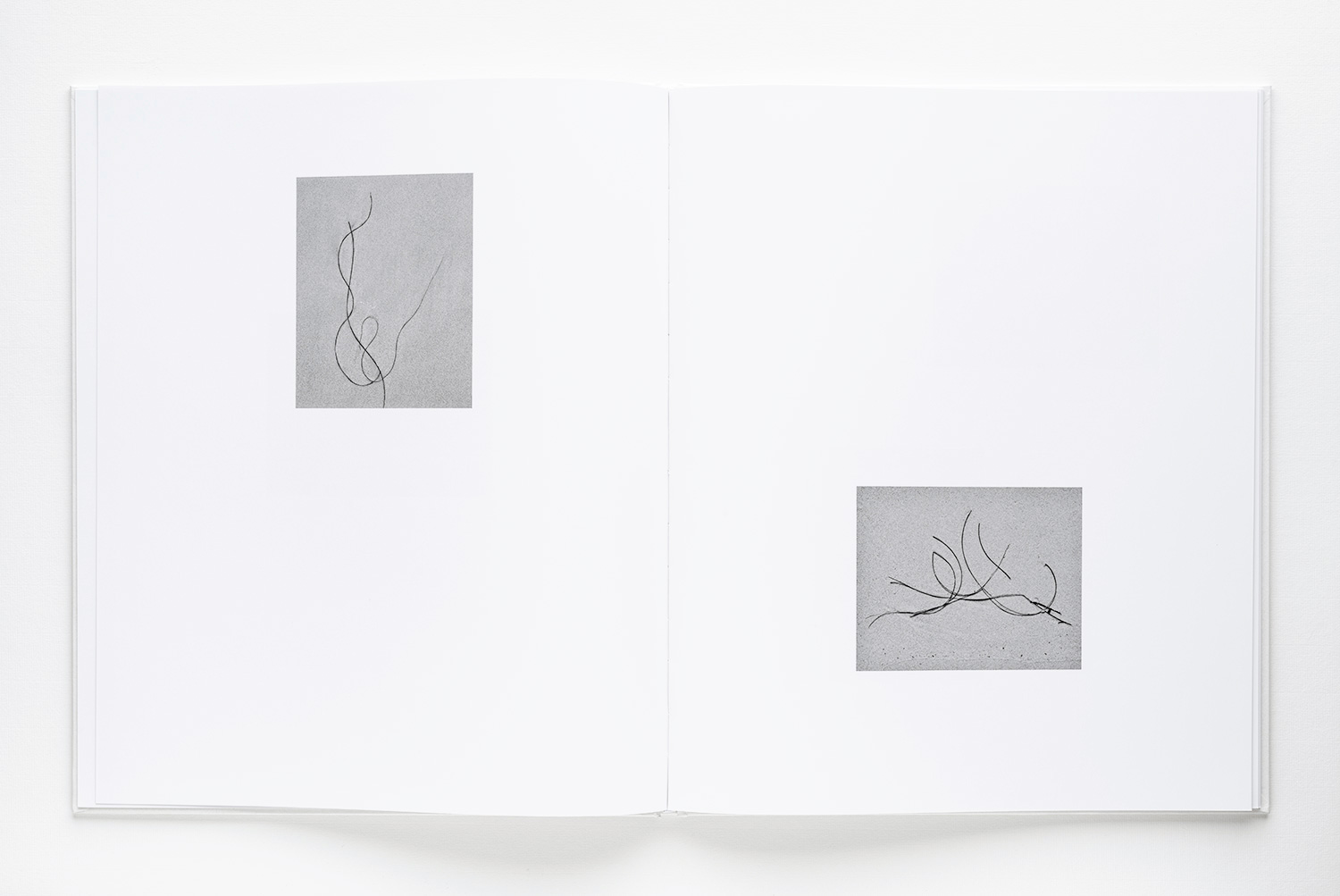 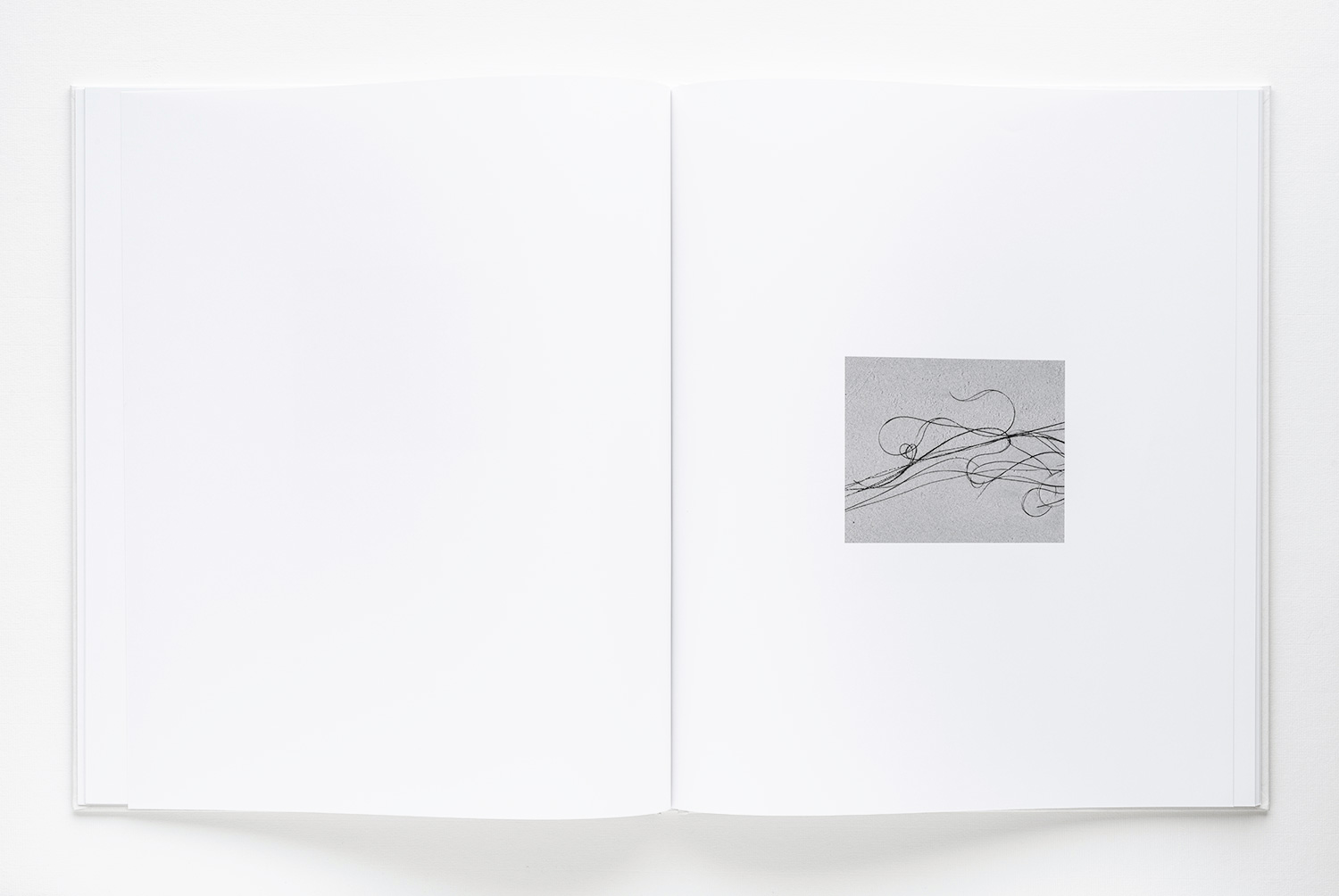 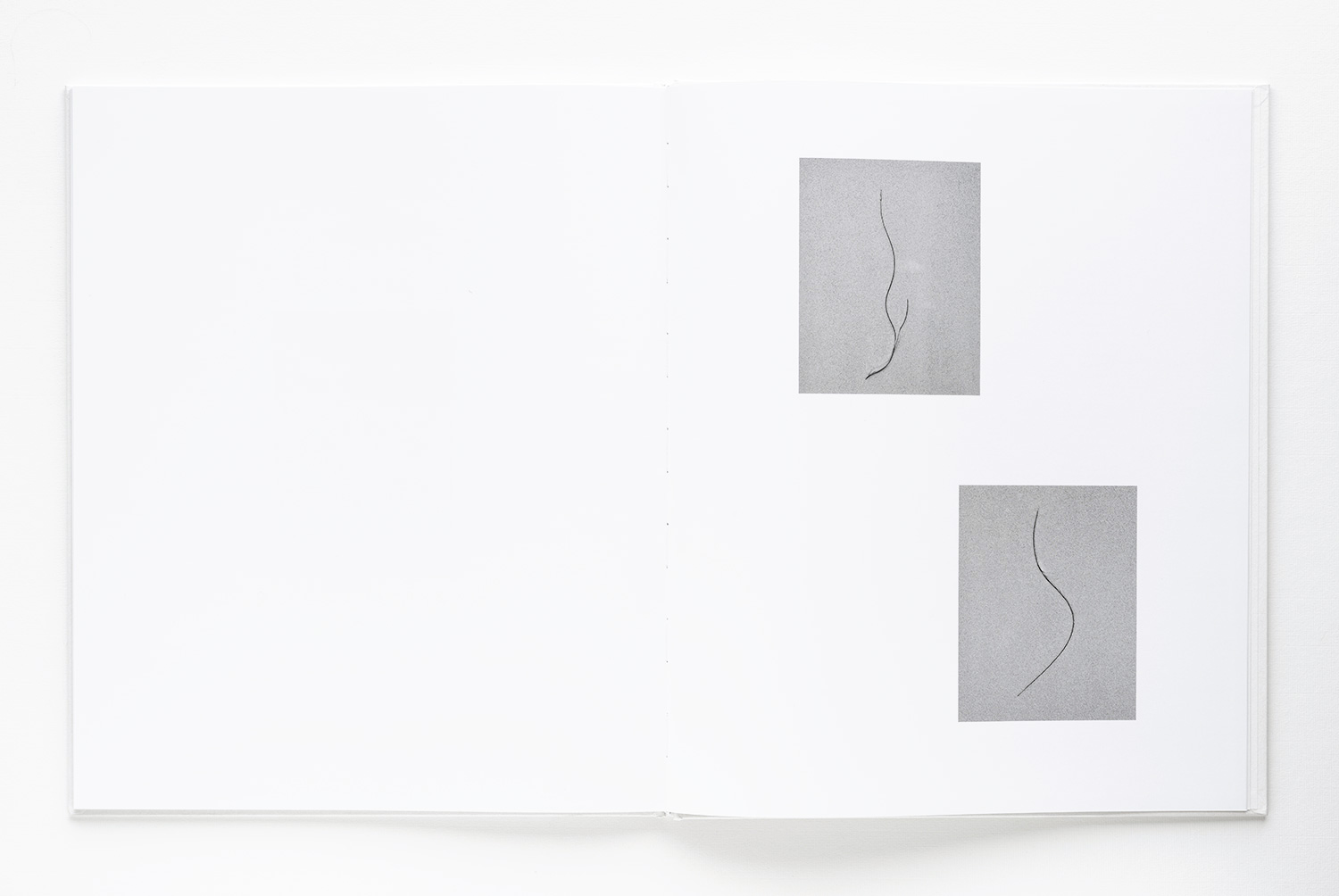 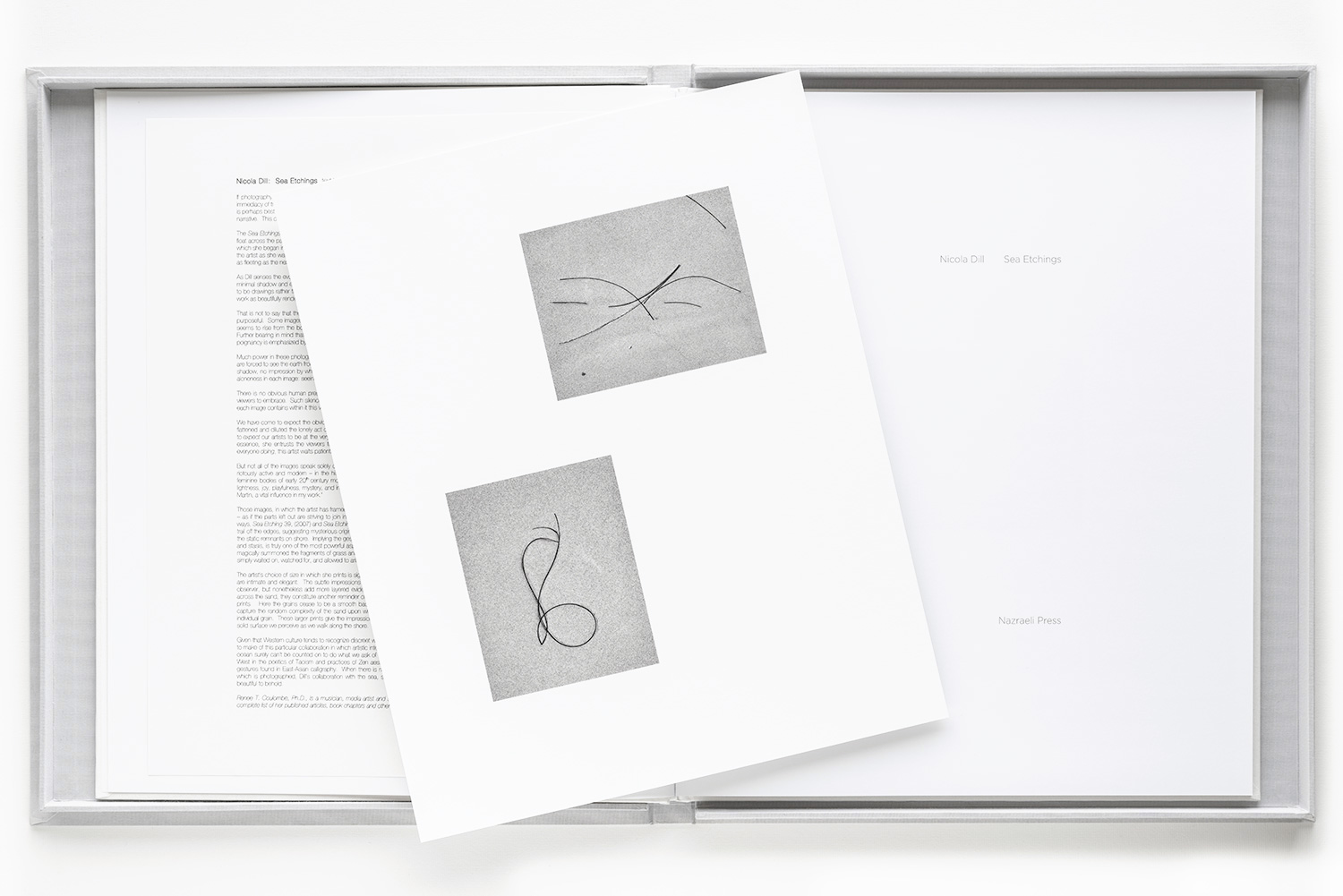 Limited to 25 copies
Published by Nazraeli Press, USA
Publication: 2012
Numbered and signed monograph presented in a clamshell box with one original signed archival pigment print (14.75 x 12 in, as shown). Also included is a laid-in broadsheet with an essay by Renee T. Coulombe, Ph.D.

Sea Etchings, essay by Renee T. Coulombe
If photography, particularly black and white, is associated with interactions of shadow and light, the artist’s framing eye, and the emotional immediacy of the subject matter, then what are we to make of German photographer Nicola Dill’s Sea Etchings? This collection of photographs is perhaps best defined by how unlike it is to other black and white photographs without the play of shadow, and the conspicuous lack of direct narrative. This contemplative work portrays the abstract seen in lines and structures of surf grass and sand reminiscent of gesture drawings.

The Sea Etchings were recently published by Nazraeli Press, in an artist’s monograph comprising, in her words, “an installation of images that float across the pages akin to notes of a melody collaborating in a moving meditation.” The series is inspired by her longtime practice of t’ai chi, which she began in the early 90’s. Shot over several years along the coast of Southern California, each image captures the extreme patience of the artist as she waits for each to arise of itself. No hand other than the grass and the sea stages these temporary etchings. As such they are as fleeting as the next wave, capturing an ephemeral world that speaks powerfully to the very nature of existence.

As Dill senses the evocative language expressed in these momentary compositions she photographs with direct overhead sunlight to produce minimal shadow and each blade of surf grass becomes the very essence of line and gesture. Indeed, the casual observer might believe them to be drawings rather than photographic images. This noticeable transcendence of the medium is further enhanced in her presentation of the work as beautifully rendered pigment ink prints on matte finished papers.

That is not to say that the eye or technique of the photographer is nowhere in evidence. The framing of each image is extremely precise and purposeful. Some images reveal carefully framed, simple linear gestures, such as the one that closes the book Sea Etching 48, (2007), which seems to rise from the bottom to the top of the page. Remembering that this was taken from above, we “reorient” our vision to the work. Further bearing in mind that Sea Etching 48 is a “found gesture” gives the simple line a poignancy not normally associated with surf grass. This poignancy is emphasized by the specific framing and even light.

Much power in these photographs resides in their disorienting point of view – as if the very ground beneath our feet has been raised up and we are forced to see the earth from a new perspective. The viewer’s eye floats over each image without finding a trace of the artist’s presence – no shadow, no impression by which to orient themselves. There is no place for the viewer, in essence, “to stand.” This increases the feeling of aloneness in each image: seeing no evidence of the background as ground.

There is no obvious human presence here, an aspect that gives each image a sense of pause that can be difficult for some contemporary viewers to embrace. Such silence in images, which amounts to an individual invitation for us to slow down, can be almost unbearable. It is as if each image contains within it this vast silence, where viewers find themselves literally “at sea” without the guiding hand of the photographer.

We have come to expect the obvious hand, the eye, or even the body of the artist to be readily accessible in this digital age. As culture has flattened and diluted the lonely act of making art, the universal access to the creation, editing and dissemination of visual work has moved us to expect our artists to be at the very center of their own product. Yet for Dill the very lack of omnipresence gives the work such power. In essence, she entrusts the viewers to interpret and to feel their way through these photographs. In an age in which the emphasis is on everyone doing, this artist waits patiently for the sea to produce and lets the work just be. This is revolutionary.

But not all of the images speak solely of impermanence, there are some that manage to make surf grasses washed upon shore seem quite riotously active and modern – in the historical sense of that term. Several could be minimal sketches of landscapes, or evoke the round feminine bodies of early 20th century modernist painters. As the artist herself notes: “In their easy quietness the images exude a sense of lightness, joy, playfulness, mystery, and innocence. They are reminiscent of the inherent qualities found in the simplified abstractions of Agnes Martin, a vital influence in my work.”

Those images, in which the artist has framed parts of grasses that extend beyond the edges of the photograph, become active in their stillness – as if the parts left out are striving to join in, to “be seen” as a part of the whole. Two particular images illustrate this aspect in very different ways, Sea Etching 39, (2007) and Sea Etching 64, (2009). One is starkly linear and the other riotously round yet each has lines of grass which trail off the edges, suggesting mysterious origins for each as well as a level of movement and active striving not typically thought of when viewing the static remnants on shore. Implying the gestural movement of hand across paper, in what is actually a moment of apparent stillness, silence and stasis, is truly one of the most powerful aspects of the work. At first glance we might imagine we see the hand of the artist here, as if Dill magically summoned the fragments of grass and bent them to her artistic will. How much more profound that these “found” works of art were simply waited on, watched for, and allowed to arise of themselves.

The artist’s choice of size in which she prints is significant. The small-scale prints of 4 x 5 inches, corresponding with those in the monograph, are intimate and elegant. The subtle impressions of the waves in the sand that surround the grasses are nearly imperceptible to the casual observer, but nonetheless add more layered evidence of the cyclic nature of the ocean’s process. Like the compositions of strewn grass across the sand, they constitute another reminder of the rhythms of the natural world. The sand gains greater impact in the larger 15 x 19 inch prints. Here the grains cease to be a smooth background surface and become a bustling crowd of shapes and tones. The larger prints capture the random complexity of the sand upon which the grasses rest temporarily – revealing the myriad sizes, shapes and tints of each individual grain. These larger prints give the impression that the sand is perhaps three-dimensional, multi-layered at the very least, far from the solid surface we perceive as we walk along the shore.

Given that Western culture tends to recognize discreet works of an individual creative mind far more readily than collaborative work, what are we to make of this particular collaboration in which artistic intent and conscious involvement can only be ascribed to one of the collaborators? (The ocean surely can’t be counted on to do what we ask of it.) The answer can perhaps most readily be found beyond the practice of art in the West in the poetics of Taoism and practices of Zen aesthetics; many Sea Etchings actually invoke visual echoes of the brush strokes and gestures found in East-Asian calligraphy. When there is no separation between artist and art, no distinction between photographer and that which is photographed, Dill’s collaboration with the sea, sand and surf grasses becomes deeply enlightening, meditative, and even more beautiful to behold.

Renee T. Coulombe, Ph.D., is a musician, media artist and scholar who has been publishing articles on media and the arts since 1998.  A complete list of her published articles, book chapters and other writings can be found at her website.  www.reneetcoulombe.com